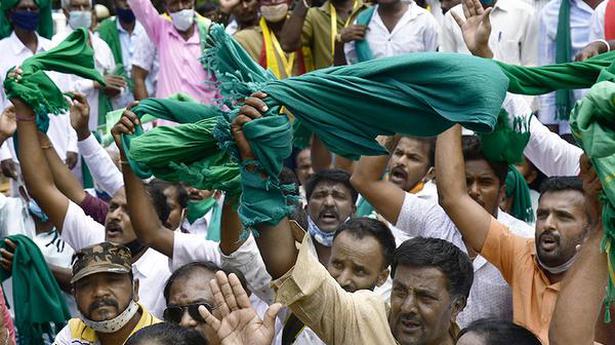 Farmers have decided to intensify their protests after talks with Chief Minister B.S. Yediyurappa on Friday afternoon did not yield any results. According to those who participated in the meeting, there was no “positive reaction or response” from the Chief Minister’s side.

“The CM indirectly and subtly indicated that they were ready for only one or two minor changes in land reforms such as reducing the 216-acre ceiling for purchasing dry lands,” said Mr. Nagendra.

T.N. Prakash Kammardi, former chairman, Karnataka Agricultural Prices Commission, said they were “pained and disappointed after CM did not speak even of postponing the passage of the two Bills”.

“We raised many questions to which the Ministers did not have an answer. We tried to convince them that both the Bills would have a negative impact on self sufficiency and food security. But they were undeterred,” he said.

Kurubur Shantakumar, president, Karnataka Rajya Kabbu Belegarara Sangh, said that they also questioned the hurry in passing the Bills. “They are just toeing the lines of the Central government in the name of co-operative federalism,” he said.