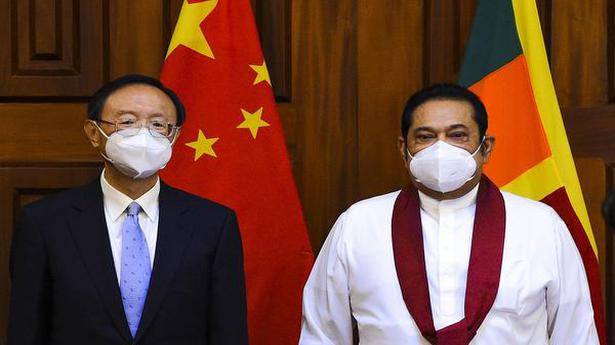 Chinese delegation is in Colombo; both sides agree to revive FTA negotiations.

President Gotabaya Rajapaksa on Friday said he was targeting a China-style development model for Sri Lanka, even as he sought greater investment and a larger market from the Asian giant.

Following his meeting with a high-level delegation from Beijing in Colombo, a statement from the President’s office said plans were afoot to recommence discussions on the Sri Lanka-China Free Trade Agreement, and to swiftly complete the China-backed Hambantota Industrial Zone and the Port City in Colombo, a flagship $1.4 billion project in China’s Belt and Road Initiative.

Recalling his past visits to China — “13 times” — President Rajapaksa told the delegation: “I have seen massive development, especially in rural areas. My target is to bring about similar development, especially in rural areas in Sri Lanka, and to raise the living conditions of the people in this country, especially that of the poor. I look forward to seeing a visible progress in the Port City project over the next four years”, according to the media statement.

The delegation from Beijing was led by Yang Jiechi, a top foreign policy official and a Politburo member of the Chinese Communist Party. Officials in Sri Lanka’s Foreign Relations Ministry described the visit of the “high-powered” delegation as a “goodwill gesture”, following President Xi Jinping’s invitation to President Rajapaksa to China, following the latter’s election win last year. President Rajapaksa could not undertake the visit in the wake of the global pandemic.

In addition to pledging China’s continued support to Sri Lanka in international forums, including at the UN Human Rights Council, Mr. Yang said: “China’s assistance will not be just lip service but concrete action to achieve the development goals,” the statement issued by the President’s office said.

Further, President Rajapaksa told the delegation that he wished to disprove the prevalent “debt-trap” analysis of Sri Lanka-China relations, in connection with the Hambantota Port, and sought China’s help in his endeavour of improving the living standards of people through the project. Building the port, strategically-located in the island’s southern tip, was Sri Lanka’s idea, not China’s, he said, adding: “We were convinced that it would be a project with a vast potential for generating income and employment opportunities. China offered to fund it.”

The statement made no reference to any new loans — China sanctioned a $500 million-loan in March to help Sri Lanka cope with the pandemic — or renegotiation of Sri Lanka’s existing debt of over $5 billion to China, though officials earlier indicated that Colombo might appeal to Beijing for a loan moratorium, just like it did to New Delhi.

However, President Rajapaksa sought China’s help to reduce the trade deficit between the two countries, the statement said.

Significantly, the two sides agreed to resume negotiation of the FTA, that Sri Lanka and China in 2013 agreed to enter. It was stalled in 2018, reportedly after Beijing turned down the former Colombo administration’s request to have the deal reviewed in 10 years.