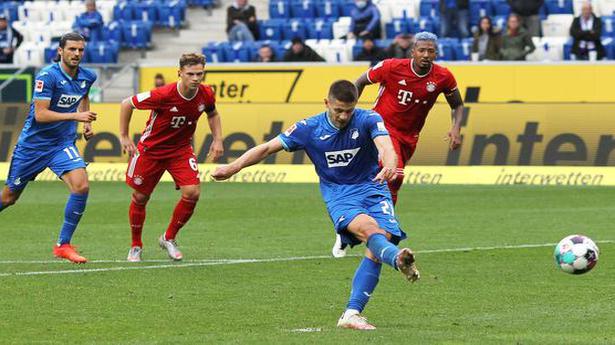 European champion Bayern Munich suffered its first defeat since December when its 23-match winning run was ended by a shock 4-1 Bundesliga defeat at Hoffenheim on Sunday.

Hoffenheim, the current league leader, raced into a 2-0 lead with early goals by defender Ermin Bicakcic and striker Munas Dabbur.

Although Joshua Kimmich gave Bayern a lifeline just before the break, Croatia international striker Andrej Kramaric netted a second-half goal and converted a late penalty to seal the win.

Tottenham fell foul of the Premier League’s newly adopted interpretation of defensive handballs, conceding a penalty deep into stoppage time to draw 1-1 at home to Newcastle.

A header by Newcastle substitute Andy Carroll struck the outstretched arm of Eric Dier inside the area and the referee awarded a penalty after viewing the incident on the pitchside monitor.

In Saturday’s late match, free-spending Chelsea came from 3-0 down to salvage a 3-3 draw at newly-promoted West Brom.

Callum Robison pounced on errors from Marcos Alonso and Thiago Silva to fire twice beyond Willy Caballero, who replaced Kepa Arrizabalaga in the Chelsea goal. Kyle Bartley then made it 3-0 to the Baggies, who had lost their opening two games back in the top flight.

Mason Mount got the comeback started to a swerving long-range effort. Substitute Callum Hudson-Odoi then swept home 20 minutes from time after a neat one-two with Kai Havertz. And Tammy Abraham secured a point in stoppage time when he rolled in the rebound after Sam Johnstone had parried Mount’s initial effort.

Meanwhile, Real Madrid had good reason to approve of the video assistant referee.

A handball that had gone unnoticed on the field was spotted by the VAR near the end of Madrid’s match at Real Betis on Saturday, sending Sergio Ramos to the spot to convert an 82nd-minute penalty and take a 3-2 victory in Seville.