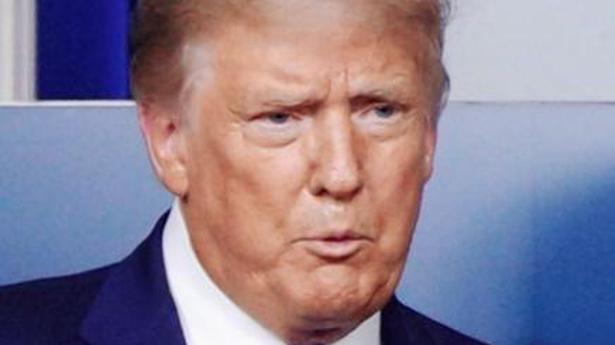 The postal ballots are a disaster, says U.S. President

U.S. President Donald Trump failed to commit to the peaceful transfer of power when asked a question on the subject on Tuesday, adding to concerns that the post-election scenario in November might be chaotic.

“Well, we’re going to have to see what happens. You know that I’ve been complaining very strongly about the ballots and the ballots are a disaster,” Mr. Trump said in response to the question.

The President, in a bid to question the legitimacy of postal ballots, has been complaining for months about vote by mail, including by making unsubstantiated claims about the incidence of voter fraud (orchestrated by Democrats).

All States use some amount of mail in voting but the COVID-19 pandemic has meant an expansion of the process across the country. Vote by mail has already started for the elections, and at least 75% of Americans will be eligible for a postal ballot as per a New York Times study.

“Get rid of the ballots and you’ll have a very peaceful… there won’t be a transfer frankly, there’ll be a continuation,” Mr Trump said when the reporter further pressed him on whether he’d commit to a peaceful transfer of power in light of the fact that “people are rioting.”

In an interview to Chris Wallace of Fox News, Mr. Trump had in July said he would “have to see” when asked if he would accept the November election results. In 2016, running against Hilary Clinton, Mr. Trump had given a similar answer to the question.

Mr. Trump also stated on Wednesday that he wanted to replace liberal justice Ruth Bader Ginsburg before the November 3 election as he expected a dispute over the results . Mr. Trump is expected to announce his pick on Saturday, a pick that is likely to further solidify the conservative majority of the court.

Former (2012) Republican presidential nominee and U.S. Senator from Utah Mitt Romney, who had voted to convict Mr. Trump on impeachment charges earlier this year but has also said he will consider a Trump nominee for the Supreme Court, reacted strongly to Mr. Trump’s comments on Wednesday.

“Fundamental to democracy is the peaceful transition of power; without that, there is Belarus. Any suggestion that a President might not respect this Constitutional guarantee is both unthinkable and unacceptable,” Mr. Romney wrote on Twitter.

Democratic presidential nominee Joe Biden reacted to Mr. Trump’s comments and said he was not surprised, while implying a challenge to the peaceful transfer of power was not something that happened in the U.S.

“What country are we in? “Mr. Biden told reporters in Delaware. “He [Mr. Trump] says the most irrational things. I don’t know what to say… but it doesn’t surprise me.”

“The American people will decide this election. And the U.S. government is perfectly capable of escorting trespassers out of the White House,” the Biden campaign said in a statement issued on Wednesday.