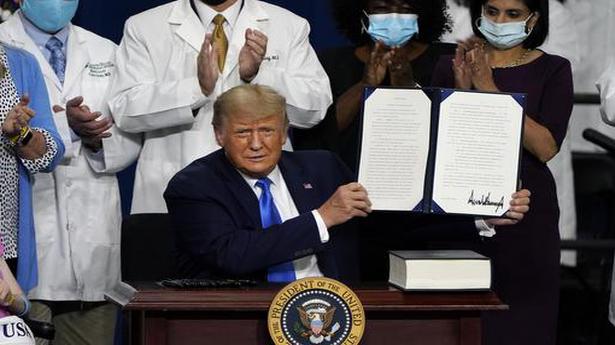 Donald Trump lags Joe Biden in national opinion polls, especially on the question of who would better handle healthcare.

U.S. President Donald Trump on Thursday signed two executive orders on healthcare for Americans that lawyers said will carry little weight, as the president seeks to boost his flagging credibility with voters on the hot-button issue ahead of the November 3 presidential election.

Mr. Trump signed the twin orders implementing his “America First Healthcare Plan” in an airport hangar in Charlotte, North Carolina, amid an audience that included medical professionals seated socially distanced and many wearing masks amid the coronavirus pandemic.

“Under my plan 33 million Medicare beneficiaries will soon receive a card in the mail containing $200 that they can use to help pay for prescription drugs,” Mr. Trump said in describing part of his program.

One of the executive orders is aimed at ensuring Americans with pre-existing conditions retain healthcare coverage, Health and Human Services Secretary Alex Azar told reporters on Thursday, even as his own administration seeks to strike down the Affordable Care Act, or Obamacare, which protects the same right.

Mr. Azar also said Mr. Trump was directing him via the second executive order to work with Congress to pass legislation banning surprise healthcare bills by the beginning of next year, and explore executive action to address the goal if the legislative bid fails.

House of Representatives Speaker Nancy Pelosi, a Democrat, labelled it a “bogus order,” as she called on the president to ”drop his lawsuit to overturn the Affordable Care Act in the middle of a pandemic.”

While Mr. Trump heralded his actions, some lawyers expressed skepticism that he had the authority to make the move via executive order.

Nicholas Bagley, a professor at University of Michigan’s law school, said: “Unless there’s a law that prohibits the conduct in question, or unless the president is exercising a power that’s been delegated to him by Congress, his statements have no more legal weight than a tweet.”

“It’s as if I was walking around with a memo that was titled ‘Executive Order,’ and claimed that the policy of the United States is that everybody gets a cheeseburger on Tuesdays,” he added.

The president’s action, unveiled less than six weeks before Election Day on November 3, also comes amid long-standing criticisms that he has failed to follow through on promises to propose an alternative to Obamacare even as he works to dismantle that program.

Trump also has drawn fire for his administration’s response to the deadly coronavirus, which has killed more than 200,000 Americans.

In June, the Trump administration asked the U.S. Supreme Court to invalidate the Obamacare law that added millions to the healthcare safety net.

Surprise bills occur when patients visit a hospital they believe is in their health insurance network but then are seen by a doctor or specialist who is out of network. Trump previously called on Congress to address the issue in 2019.

“What the president is saying is that all the relevant players – hospitals, doctors, insurance companies – had better get their act together, and get legislation passed through Congress that protects patients against surprise medical bills,” Azar said.