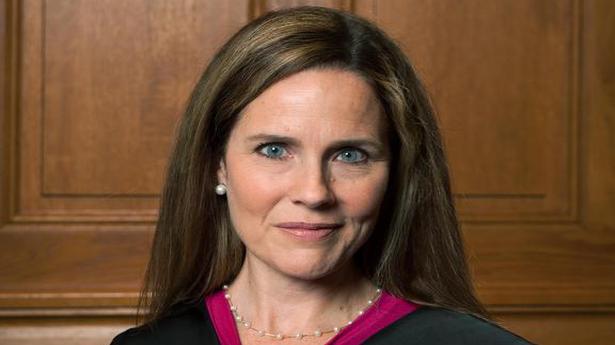 The media reports said Mr. Trump could still change his mind between now and the announcement on Saturday.

US President Donald Trump plans to nominate Judge Amy Coney Barrett to the nine-member bench of the US Supreme Court to fill up the vacancy following the death of Judge Ruth Bader Ginsberg, multiple news reports said on Friday.

Mr. Trump has said he will announce his Supreme Court nominee at the Rose Garden of the White House on Saturday (early hours of Sunday in India).

Ms. Barrett (48) is currently a judge on the 7th Circuit Court of Appeals, for which she was nominated by Trump in 2017. The US Senate confirmed her nomination by 55-43 votes.

The media reports said Mr. Trump could still change his mind between now and the announcement on Saturday.

According to The Hill newspaper, Barrett is the favourite choice of conservative Christians, who hope to overturn the landmark decision in Roe v. Wade, establishing a woman’s right to an abortion.

She has strong support from conservative Republican senators. “He (Trump) has made his decision and it is Barrett,” an unnamed official was quoted as saying. Multiple media reports said Trump has started informing his allies on Capitol Hill. The president is reported to have met Barrett at the White House earlier this week.

Nominations to the Supreme Court carry a lot of significance as the judges are appointed for lifetime and they do not have a retirement age unlike other apex courts of the world, including the Indian Supreme Court.

Mr. Trump has asserted that it is his constitutional duty to fill up the vacancy on the US Supreme Court. After justices Neil Gorsuch and Brett Kavanaugh, Ms. Barrett would be Mr. Trump’s third nominee in the first term of his presidency.

“She was the plan all along. She is the most distinguished and qualified by traditional measures. She has the strongest support among the legal conservatives who have dedicated their lives to the court. She will contribute most to the court’s jurisprudence in the years and decades to come,” a former senior administration official familiar with the process told CNN.

Before being sworn-in as a judge on the 7th Circuit Court of Appeals, Ms. Barrett was the Diane and MO Miller II Research Professor of Law at the Notre Dame University Law School. She taught and researched in the areas of federal courts, constitutional law and statutory interpretation, in addition to publishing scholarship in leading legal journals such as the Columbia, Virginia and Texas Law Reviews.

Before joining the Notre Dame faculty, Ms. Barrett clerked for Associate Justice Antonin Scalia of the Supreme Court and for Judge Laurence H Silberman of the US Court of Appeals for the DC Circuit.

Following her clerkships, as an associate at Miller, Cassidy, Larroca & Lewin in Washington, DC, she litigated constitutional, criminal and commercial cases in both trial and appellate courts.