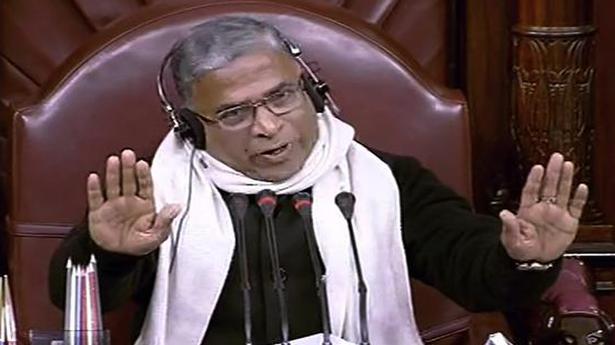 Deputy Chairperson to fast for a day.

Deputy Chairperson Harivansh, on Tuesday, met the suspended Rajya Sabha members who are sitting on a dharna in the lawns of Parliament premises. He offered tea and snacks to the protesting members and spent time with them.

“Harivansh Ji said he came to meet us as a colleague & not as Deputy Chairman of Rajya Sabha, Ripun Bora, one of the protesting member told ANI adding that they would continue their demonstration.

Prime Minister Narendra Modi lauded Mr. Harivansh for his gesture. “To personally serve tea to those who attacked and insulted him a few days ago as well as those sitting on Dharna shows that Shri Harivansh Ji has been blessed with a humble mind and a big heart. It shows his greatness. I join the people of India in congratulating Harivansh Ji,” Mr, Modi tweeted.

“For centuries, the great land of Bihar has been teaching us the values of democracy. In line with that wonderful ethos, MP from Bihar and Rajya Sabha Deputy Chairperson Shri Harivansh Ji’s inspiring and statesman like conduct this morning will make every democracy lover proud,” he added.

Later, Mr. Harivansh announced a 24-hour long fast, hoping that this may inspire a feeling of “self-purification” in them.

In a letter to Rajya Sabha Chairperson, he recounted the ruckus in the House on Sunday during the passage of farm bills. Whatever happened in front of me on September 20 has caused unimaginable loss to the dignity of House and Chair, he said.

Noting that the birth anniversary of ‘rashtra kavi’ (national poet) Ramdhari Singh ‘Dinkar’ falls on Wednesday, he said he will end his fast tomorrow.