India reported over 1 lakh coronavirus recoveries in a single-day for the first time, improving the recovery rate to 80.86 per cent, while fresh cases also dropped below 76,000 after two weeks, according to the Health Ministry data updated on Tuesday.

India has reported more than 90,000 COVID-19 recoveries for the third day in succession on Monday, with 93,356 patients having been discharged in the last 24 hours, the Union Health Ministry said, adding that 79% of the new recoveries are from 10 States/Union Territories.

Two nonagenarian COVID-19 patients have been cured of the highly infectious disease in Odisha, bringing cheers to the medical fraternity in the eastern state.

The two patients — Satchidananda Mohanty and Dhirendranath Das — both aged 91, were admitted to dedicated COVID-19 hospitals in Cuttack and Bhubaneswar respectively.

Both the men were admitted to the hospitals on September 5 after being diagnosed with the disease. They were discharged on Sunday night.

Mohanty, an eminent advocate in Kendrapara town, was also suffering from hypothyroid and neurological ailments. He was immediately shifted to the ICU after his admission to the hospital.

“We were worried about his condition as his oxygen level had dropped a day after his admission. However, his condition improved gradually after we put him under oxygen support,” a doctor who treated Mohanty said.

“Doctors and other health personnel at the hospital were like my family members,” Mohanty said.

His 60-year-old son Debdas, a type-II diabetes patient, also recovered from COVID-19 after being treated at the same hospital.

The other nonagenarian patient, Dhirendranath Das, a former senior official with the Press Information Bureau and the All India Radio, was also shifted to the ICU. Das had developed a breathing problem after contracting the disease.

PPE-clade nurses had fed the patient as he was unable to eat by himself. “While my father was being taken to the hospital, he had told us he would defeat coronavirus. It became a reality because of the relentless efforts of the doctors and the nurses,” Das’s daughter Debadatta said.

According to a Health Department official, the Congress legislator developed symptoms of the virus two days ago. His test results came on Monday night and he has been admitted to a private hospital in Chennai, the official said.

There are indications that Tamil Nadu’s economy may return to the pre-COVID-19 level in a couple of months but the State may have to increase its spending to create more jobs at this time, former Reserve Bank of India Governor C. Rangarajan said on Monday.

Mr. Rangarajan submitted a 250-page report of a high-level committee that he headed to Chief Minister Edappadi K. Palaniswami at the Secretariat on Monday.

The officials of the COVID-19 task force have intensified the process of detecting primary and secondary contacts in Tirupati and Chittoor municipal corporations and Srikalahasti municipality, which account for close to fifty percent of the total cases, as the tally crossed the 55,000-mark by Monday. With 590 casualties, the district tops the State’s toll and comes third in the tally.

Fire breaks out in COVID hospital near Cuttack

Over 100 patients were safely evacuated after a fire broke out at a dedicated COVID-19 hospital at Jagatpur on the outskirts of Cuttack on Monday.

The incident took place just after noon at Sadguru Hospital, which has been declared a special COVID-19 hospital by the Cuttack administration. While the hospital has a total of 152 beds, 127 beds, including 20 intensive care unit (ICU) beds, were occupied.

Maharashtra records highest single-day recoveries yet with more than 30,000 discharges In a heartening trend, Maharashtra’s recoveries exceeded its case surge for the fourth consecutive day as 32,007 patients were discharged on Monday in what is the State’s the highest single-day recovery figure till date.

The Airports Authority of India may soon set up one more COVID-19 testing facility at Chennai airport for arriving passengers.

A leading private hospital’s facility may be installed on the airport premises later this week or early next week with staff for collecting samples of passengers who may want to get tested.

Virus cases fall below 3K as tests drop by 42% 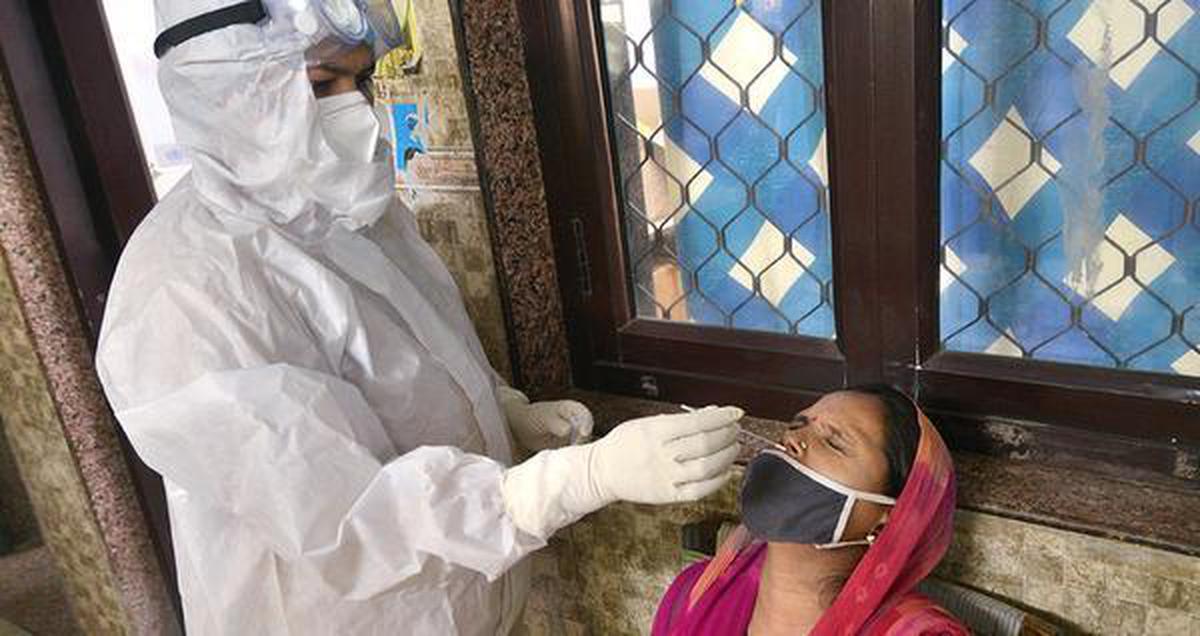 Rapid antigen test in progress at a dispensary in Seemapuri on Monday.
| Photo Credit:
R.V. Moorthy

As many as 2,548 new COVID-19 cases were reported in Delhi in the past 24 hours, taking the total number of cases to 2,49,259, according to a health bulletin released by the Delhi government on Monday.

The total number of daily tests done as per Monday’s bulletin was less than the average of the last three days by 42%. This trend is seen on most Mondays as data represents the tests done on Sunday.

Telangana’s testing level dropped by nearly half, and only 55% of the usual number of tests were conducted on Sunday. From September 14, around 55,000 samples were tested per day. On Sunday, only 31,095 samples were tested, of which 1,302 were positive.

It is important to note that no strain of coronavirus or clade at present has been conclusively shown to be associated with a more severe form of COVID-19 or an increased risk of death, affirmed scientists at the CSIR-Centre for Cellular and Molecular Biology (CCMB) on Sunday.