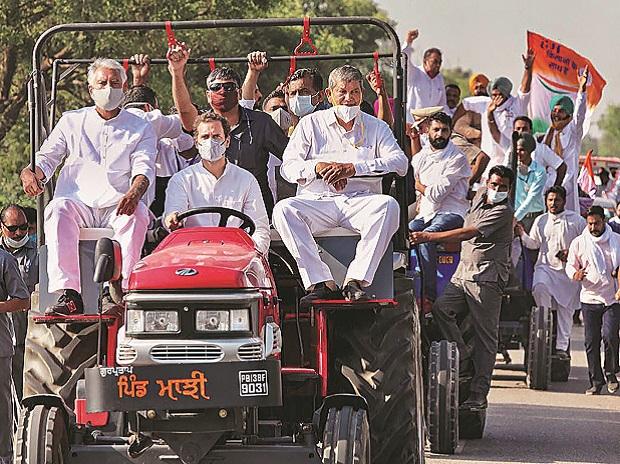 Capping three days of protests against the new farm laws, Congress leader Rahul Gandhi on Tuesday said his party will not allow the Centre to imperil India’s food security as he attacked Prime Minister Narendra Modi on a host of issues, including the Hathras case and the Ladakh standoff.


Claiming that several institutions, including the media, that protect the voice of the people have been “captured” by the BJP-led Centre, he said, “Give me free press and institutions which are free, this government will not last for long.” A combative Gandhi also targeted the prime minister on demonetisation and GST, besides the farm laws, and asked why he was “scared” of answering queries from mediapersons.


The prime minister does not understand these farm laws, the Congress leader alleged on the final day of his tractor rally in Punjab and dared Modi to come to the state and stand with farmers if these new legislations were in the interest of the farming community.


ALSO READ: UP CM should have decency to call Hathras incident a tragedy: Rahul Gandhi


He had begun his ‘Kheti Bachao’ yatra from Moga district on Sunday to protest against the laws.


Striking an emotional chord, he said he owed a debt to Punjab and Punjabis and was standing with them against the farm laws.


“I remember in 1977, my grandmother (Indira Gandhi) lost an election. There was nobody in the house, but there were Sikhs in my house. She was protected by Sikhs in 1977. I will never forget that,” he said.


Gandhi also said he feels he gets “beaten up so much in politics” because he instinctively stands with the weak.


Calling the existing food security system a “fortress” for farmers, Gandhi said it needed improvement and reforms, which the Congress manifesto had also promised, but the new laws will destroy it.


ALSO READ: This is India’s fight, not just of farmers: Rahul Gandhi on farm laws


“Why does not Modi ji hold a press conference like this and say these (laws) are in farmers’ interest. Why does he not come to Punjab and stand with farmers and say this,” he said.


After winding up his last rally at Sanaur in Patiala, Gandhi drove a tractor to reach the Haryana border where, after high-drama, Haryana authorities allowed the former Congress chief and a few party leaders to enter the BJP-ruled state to continue his rally against farm laws.


Scores of Congress workers along with its Punjab unit president Sunil Jakhar and senior party leader Harish Rawat were accompanying Gandhi, but the rally was stopped on the highway near Teokar village on Pehowa border for an hour.


ALSO READ: Get ‘beaten up so much’ because I instinctively stands with the weak: Rahul


The BJP-led Haryana government had on Monday said the Congress leader can bring a few people in the state but it will not permit a big crowd from Punjab which can “disturb” the atmosphere.


Addressing a rally in Pehowa, Kurukshetra, Gandhi asserted that his party will not back down an inch on its stand.


He said mandis give employment to so many people, and if these are finished with these laws lakhs will be rendered jobless.


Referring to the Ladakh standoff, he said had the UPA been in power, the neighbouring nation would not have dared to look at our country with an evil eye.


He also alleged that China had “entered” India and killed our soldiers as Modi has “weakened” the country.


Had the UPA been in power, “we would have evicted and thrown out China and it would not have taken 15 minutes to do so”, he said.


Earlier, Gandhi alleged that Prime Minister Modi is “not bothered” about what is happening in the country and he only “protects his image” “They talk of ‘Bharat Mata’, but Narendra Modi gave 1,200 square km of ‘Bharat Mata’ to China to protect his image. It is the reality,” he alleged.


Gandhi said that if farmers are hit with the implementation of the new laws, then India’s food security will be finished. “And if that happens, the entire country will once again become a slave,” he said.


“This fight is not just a fight of farmers and labourers, but this is India’s fight,” he said addressing a public rally at Francewala village near Sanaur in Punjab’s Patiala district on the concluding day of his ‘Kheti Bachao Yatra’.


Gandhi suggested that the media should call the prime minister to a press conference and talk to him openly.


“Why is he scared of you… Modi ji is only interested in his image. He will go to (Atal) tunnel alone and then wave.


“The media, on which there is full monopoly, will show it. So, he has an obsession with his image only. What is happening in India, he is not bothered about it,” he told reporters.


Gandhi also said that Prime Minister Modi has not spoken “a word” on the Hathras incident, where a 19-year-old Dalit woman was allegedly gang raped and brutalised on September 14. She died a fortnight later.


Gandhi said that “a child is raped and murdered, but the whole administration attacks the family and country’s prime minister does not utter a word”.


Rahul Gandhi and party leader Priyanka Gandhi Vadra had recently travelled to Hathras in Uttar Pradesh to meet the family members of the victim.


The Congress leader said that with the new farm laws, not only farmers but consumers would also be affected.


The Congress is opposing the Farmers’ Produce Trade and Commerce (Promotion and Facilitation) Bill, the Farmers’ (Empowerment and Protection) Agreement of Price Assurance and the Farm Services Bill; and Essential Commodities (Amendment) Bill, which were passed by Parliament last month.


The government has maintained that the laws will help the farmers get a better price for their produce. It has accused the Opposition of misleading farmers and protecting “middlemen”.


To a question on a weak Opposition in the country, Gandhi said that the Opposition functions within a framework that includes the media, the judicial system and institutions that protect the voice of the people.


“In India, this entire framework that protects the voice of the people has been captured. The entire architecture has been captured and then to say that the opposition is weak is not a correct statement,” he told reporters.


Gandhi said he was committed to fighting against the Modi government’s “attack” on farmers.


The government had earlier targeted SMEs and small traders with demonetisation and GST, he alleged “I will fight them and stop them,” Gandhi said, pointing out that without minimum support price, Punjab, Haryana, and other agricultural states like Uttar Pradesh and Rajasthan will have no future.


Taking a dig at the BJP for criticising him for sitting on a ‘gaddi’ (cushion) on a tractor, Gandhi quipped that the prime minister’s ‘Air India One’ did not just have a cushion but a whole lot of luxury beds for his comfort.


“Why don’t you question them about this,” Gandhi asked.


He accused the prime minister of “wasting” thousands of crores of rupees on the plane just because “his friend Donald Trump (US President) has one (Air Force One)”.


On why he was not present in Parliament during voting on the new farm laws, Gandhi said he had a son’s duty too and accompanied his mother for a medical check-up abroad.


“My mother (Sonia Gandhi) had gone for a medical check-up and my sister couldn’t go with her because some of her staff members had Covid. So, that is why I was with my mother, I am her son also and I have to look after her,” he said.