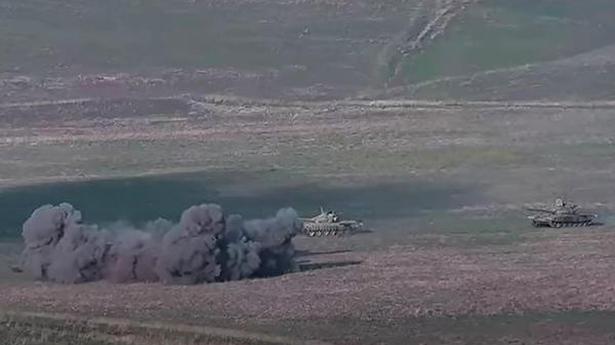 Clashes erupted between Armenia and Azerbaijan on Sunday over the volatile Nagorno-Karabakh region, reigniting concern about instability in the South Caucasus, a corridor for pipelines transporting oil and gas to world markets.

Both sides, which fought a war in the 1990s, reported fatalities. Armenia and Nagorno-Karabakh, a breakaway region that is inside Azerbaijan but is run by ethnic Armenians, declared martial law and mobilised their male populations.

Armenia said Azerbaijan had carried out an air and artillery attack on Nagorno-Karabakh.

Azerbaijan said it had responded to Armenian shelling and that it had seized control of up to seven villages, but Nagorno-Karabakh denied this.

The clashes prompted a flurry of diplomacy to prevent a new flare-up of a decades-old conflict between majority Christian Armenia and mainly Muslim Azerbaijan, with Russia calling for an immediate ceasefire and Pope Francis leading calls for talks.

Pipelines shipping Caspian oil and natural gas from Azerbaijan to the world pass close to Nagorno-Karabakh. Armenia also warned about security risks in the South Caucasus in July after Azerbaijan threatened to attack Armenia’s nuclear power plant as possible retaliation.

Nagorno-Karabakh broke away from Azerbaijan in a conflict that broke out as the Soviet Union collapsed in 1991. Though a ceasefire was agreed in 1994, after thousands of people were killed and many more displaced, Azerbaijan and Armenia frequently accuse each other of attacks around Nagorno-Karabakh and along the separate Azeri-Armenian frontier.

In Sunday’s clashes, Armenian right activists said an ethnic Armenian woman and child had been killed. Azerbaijan said an unspecified number of its civilians had been killed. Nagorno-Karabakh denied a report that 10 of its military were killed.

“We stay strong next to our army to protect our motherland from Azeri invasion,” Armenian Prime Minister Nikol Pashinyan wrote on Twitter.

Azerbaijan denied an Armenian Defence Ministry statement saying Azeri helicopters and tanks had been destroyed, and accused Armenian forces of launching “deliberate and targeted” attacks along the front line.

“We defend our territory, our cause is right!” Azerbaijan’s President, Ilham Aliyev, said.

Turkey said Armenia must immediately cease what it said was hostility towards Azerbaijan that will “throw the region into fire”.