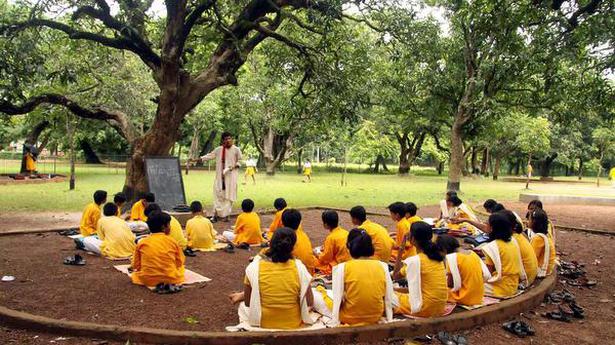 Using the term “khoshgolpo”, or a pleasant conversation, does not amount to sexual harassment by any stretch of imagination, the Calcutta High Court has held in a case related to Visva-Bharati University Faculty Association president Sudipta Bhattacharyya.

Mr. Bhattacharyya, a professor of economics at the university, has been serving as a pinprick for Vice-Chancellor Bidyut Chakrabarty ever since the latter took charge in November 2018, questioning many of his decisions and accusing him of damaging the secular nature of the university.

On July 1, the university issued a notice to Mr. Bhattacharyya for allegedly making a derogatory remark against the Vice-Chancellor on Facebook. He contended that he had made the remark on a closed WhatsApp group and that too he had not named anyone. But on August 4, he was summoned by an enquiry committee to explain as to why he had made the remark. He told the committee that he would not respond unless he was given a formal chargesheet, and as a parting shot, said he was happy to have had “khoshgolpo” with the members.

One of the female members of the committee, however, took offence at the use of the word, upon which Mr. Bhattacharyya, on camera, withdrew his statement. The member, subsequently, mentioned the matter to the Vice-Chancellor and was asked to put down the episode in writing. Her letter was forwarded to the Internal Complaints Committee, which issued a notice to Mr. Bhattacharyya on August 14, following which he went to the Calcutta High Court.

“The dictionary meaning of the Bengali word “Khoshgolpo” is ‘a pleasant chat, an amusing tale or story’. The complaint does not even indicate that the said amusing chat of pleasant story was made with any inappropriate gesture or expression or otherwise. It, therefore, is ex facie clear to the Court that the word by any stretch of imagination, cannot amount to any sexual harassment,” Justice Rajasekhar Mantha said on Friday.

“Courts normally do not interfere with enquiries, particularly that of sexual harassment, at the inception. The facts of the instant case are, however, too blatant and proceedings absolutely ridiculous, warranting interference, to prevent abuse of process of law. The impugned notice dated August 14 and any proceedings for sexual harassment arising out of the aforesaid complaint shall remain stayed for a period of eight weeks from date,” the judge said.