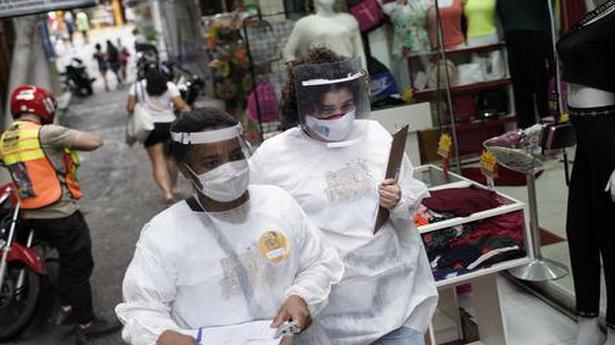 Dozens of people converged on the cobblestone streets of downtown Rio de Janeiro for its traditional Pedra do Sal samba party — the first since the coronavirus pandemic began – and it seemed Brazil was returning to normal.

Among those dancing Monday were Luana Jatobŕ and two friends, all of whom overcame COVID-19. As a nurse technician caring for coronavirus patients, she knows better than most that occupancy rates at Rio’s intensive-care units have surged as the city’s seven-day average number of cases reaches its highest level since June.

But, she said, everyone is desperate for a respite from the gloom.

“We take care of the people who are sick with COVID, but something that isn’t discussed is that there’s a very serious disease all over the world, which is depression,” said Jatobŕ. “After confinement, this samba circle is really to rescue those who felt downbeat and were oppressed. It’s not just the virus that kills.”

Brazilians, like many across the world, are burned out on quarantine. The somewhat slower pace of COVID-19’s spread, combined with less media coverage after it moved beyond Brazil’s two biggest cities, has helped people put the disease out of mind. But it continues to rip through Latin America’s largest country, and mayors — many of whom aren’t keen to keep restrictions in place ahead of November elections — are reopening their cities.

And experts are warning of a possible second wave.

At its height, Brazil was registering more than 45,000 cases and 1,000 deaths per day. Those totals took the shape of a months-long plateau, unlike most other countries whose viral curves had defined peaks. While Brazil’s figures have fallen to about 27,000 cases and 700 deaths daily – significant improvement, clearly – it’s still nothing to sneeze at.

Brazil surpassed 5 million confirmed cases on Wednesday night and is verging on 150,000 dead, the second-most in the world, according to the tally from Johns Hopkins University.

“People thought it unacceptable that 1,000 people were dying every day two months ago, and now they are fine with 700 people dying every day. It simply doesn’t make any sense,” said Pedro Hallal, an epidemiologist who coordinates the Federal University of Pelotas’ testing program, by far the country’s most comprehensive. “We can say the worst part of the first wave is done, and now obviously we need to continue to be monitoring to see if numbers go up again.”

The University of Miami’s observatory for COVID-19 in the Americas indicates that, at Brazil’s state level, the number of policies adopted to counter infection have fallen to the third-lowest in the region, behind Nicaragua, which declined to muster any meaningful response, and Uruguay, where virus incidence is among the world’s lowest.

The phenomenon is visible in Brazil’s cities, too, as campaigning mayors allow bars, restaurants and movie theaters to reopen, encouraging people to emerge from quarantine. Brazil’s statistics institute released data last week showing that the percentage of people in strict isolation or leaving home only when necessary dropped to 57% in mid-September, from 68% in early July.

“Mayors running for reelection have no interest in imposing any kind of lockdown or restrictions,” said Miguel Lago, executive director of Brazil’s Institute for Health Policy Studies, which advises public health officials. Their incentive now is to roll back pandemic measures, he added.

Limitations that ostensibly remain are often ignored. For example, Rio’s beaches have been packed on recent weekends, despite the fact sunbathing remains prohibited.

“In the Brazilian tradition, there are laws that stick and others that don’t,” Alvaro Costa e Silva, a columnist for Brazil’s biggest newspaper, Folha de S.Paulo, wrote this week. “To maintain what today is considered mental health, filling beaches and gathering in bars became a tolerated compulsion in Rio.”

As shops and some offices reopen in Sao Paulo, traffic jams in South America’s biggest city have started making a comeback. By mid-September, mobility across Brazil had returned to normal levels, according to the University of Miami’s COVID-19 observatory, based on GPS data from Google.

In Amazonas state, where early on the pandemic slammed the capital, Manaus, and forced cemeteries to dig mass graves, mobility was 24% above pre-pandemic levels. A fresh surge of cases prompted local authorities in late September to reinstate restrictions on commerce and gatherings, and to shut down the riverside beachfront.

“I wouldn’t recommend governments to relax further; there’s still room for big spikes based on people moving around and not wearing masks,” said Michael Touchton, a political science professor at the University of Miami, and co-founder of its observatory. “A second peak is still quite possible in Brazil.”

Brazilian President Jair Bolsonaro has downplayed the severity of COVID-19 from the start, and insisted that shutting down economies will inflict worse hardship on working-class families than the disease. He told the United Nations General Assembly last month that the virus and joblessness were problems that needed solving simultaneously, and touted emergency cash payouts that helped 65 million Brazilians through the downturn.

But his government hasn’t implemented a comprehensive national testing policy to identify cases swiftly and prevent their spread, nor shown any sign it intends to, according to Hallal. On the contrary, the Health Ministry yanked financing of his university’s testing program in 133 cities after its third phase, forcing him to seek private funding for its fourth and upcoming fifth phases.

Results from the most recent phase, conducted in late August, found an average 1.4% infection rate in 33,250 people, down from 3.8% in June. While the rate was just 0.8% in Rio and Sao Paulo, 23 cities – almost all in Brazil’s north and northeast – had triple that level or more.

“The population is behaving like the pandemic has been controlled, which isn’t true,” said Margareth Dalcolmo, a respiratory medicine professor at the state-funded Oswaldo Cruz Foundation, who is also lead researcher for one of several vaccine studies in Brazil. “The official discourse, versus the pressure from business and mayors to reopen everything, leaves people confused about what recommendations to follow. That’s a big challenge in Brazil.”

Back at the samba party in Rio, partygoers showed they still remember how to quickstep without spilling their plastic cups of beer. A couple danced cheek to cheek. The percussionists striking their drums and tambourine wore masks, but few spectators followed their lead.

Still, one of the event’s organizers, Jeferson dos Santos, celebrated the return of the longed-for rhythm.

“Today we have the first wave of samba, all the musicians are wearing their masks, all playing and respecting World Health Organization norms,” dos Santos said. “We hope everything goes right, with God’s will. We’re in that positive vibe.”