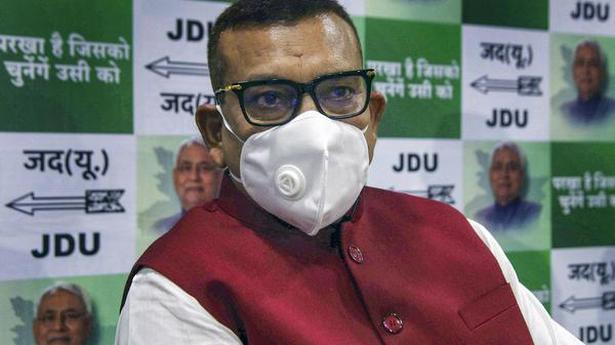 Former Bihar Director General of Police Gupteshwar Pandey was unlucky a second time as his name did not figure in the list of 115 Janata Dal-United (JD-U) candidates, released on Wednesday, to contest the upcoming State Assembly poll.

A 1987 batch IPS officer Mr. Pandey had recently taken voluntary retirement from the service, and with the State government ready to waive the customary three month cooling-off period, he joined the ruling JD(U) to contest the Assembly elections from what was considered likely to be Buxar, his home district.

Earlier, in 2009 too, he had taken voluntary retirement from the police service to contest the Lok Sabha poll on a Bharatiya Janata Party (BJP) ticket from the Buxar parliamentary constituency, but was denied the party ticket at the last hour, after which he was controversially reinstated into the police service nine months later.

In a latest post on Facebook late on Wednesday night, Mr. Pandey expressed his feelings to his well-wishers. “After my retirement from services everyone has hope that I’ll contest the assembly poll this time but I’m not contesting the election…there is no need to be desperate and to feel let down..have patience…my life has been fraught with struggle and I’ll keep serving people..please don’t call me as I’m disturbed with phone calls of my well-wishers,” Mr. Pandey said in the post.

Earlier, when asked if he would be joining politics after taking voluntary retirement, Mr. Pandey had shot back at mediapersons, “Is it a crime to join politics? Is it unconstitutional? Is it unethical?”

Later, after joining the JD(U) at Chief Minister Nitish Kumar’s official residence, in the presence of Mr. Kumar and other senior party leaders, he had said that he would contest the upcoming Assembly poll to “serve people”.

It is said that he was all set to contest the poll from Buxar but, under the National Democratic Alliance, Buxar has gone to the BJP’s kitty.

District BJP workers and leaders had registered their strong protest to the party leadership that they would not accept Mr. Pandey as their candidate.

The upper caste dominated Buxar seat has been a BJP stronghold, represented thrice by Sukhda Pandey, an articulate university professor and leader.

Mr. Dubey, said to be close to senior State BJP leader and Deputy CM Sushil Kumar Modi, has been fielded again by the BJP from the seat.

On Tuesday, it was rumoured that Mr. Pandey would join the BJP to contest the poll from Buxar, but amid simmering seat-sharing discussions among the NDA allies and strong protests by local party leaders against his candidature, Mr. Pandey’s luck proved elusive a second time.

The former police chief of Bihar had recently dominated headlines in media because of his theatrical statements on the Bollywood actor Sushant Singh Rajput’s death case.

He had also controversially said Rajput’s girlfriend Rhea Chakraborty “did not have the aukaad (stature)” to make comments about CM Nitish Kumar.

He also accused the Mumbai police of not cooperating with Bihar police in the Sushant Singh Rajput death case.

The Bollywood actor had hailed from State capital Patna, and an FIR was lodged by his father K. K. Singh at the local Rajiv Nagar police station in Patna.