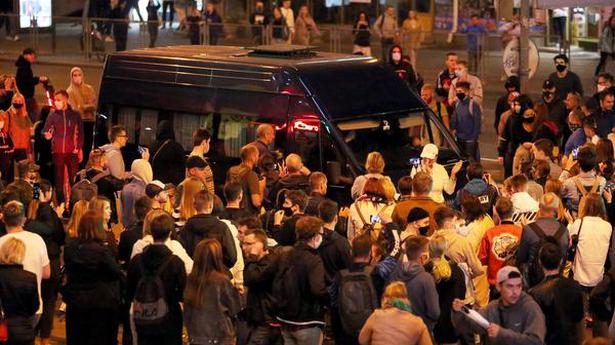 The country has been seeing demonstrations which are by far the largest and most persistent since its independence from the former Soviet Union in 1991.

Belarus’ foreign minister on Saturday warned Western nations against imposing sanctions over the country’s disputed presidential election and crackdown on protesters, saying their expressions of concern are nothing but attempts to bring chaos and anarchy to our country.

With the European Union and Britain contemplating sanctions, Belarusian Foreign Minister Vladimir Makei told the virtual UN General Assembly meeting of world leaders that interference in our internal affairs, sanctions and other restrictions on Belarus will have the opposite effect and are harmful for absolutely everyone. We call on our partners to demonstrate wisdom, restraint and impartiality, he said in a pre-recorded speech for the UN session held online because of the coronavirus pandemic.

Mr. Makei’s speech was played hours after the latest in a series of large protests in Belarus over the August 9 re-election of President Alexander Lukashenko, which his opponents say was rigged. The authoritarian leader further angered opponents this week by taking the oath of office for a new term in an unexpected and secretive ceremony.

The demonstrations are by far the largest and most persistent in Belarus since its independence from the former Soviet Union in 1991. Mr. Makei’s remarks to the international community, which included saying the people made their choice in the election, could fuel further protests Sunday.

The rallies are typically largest on Sundays, sometimes drawing crowds of up to 200,000 people.

In the first three days of demonstrations in August, police used tear gas, truncheons and rubber bullets to disperse crowds. Several protesters died, many were injured and around 6,000 were detained.

Amid international outrage over the crackdown, Belarusian authorities switched to prosecuting top activists. Many members of the Coordination Council, a group that the opposition formed to push for a transition of power, have been arrested or forced to leave the country.

Last week, the UN’s Human Rights Council passed a resolution calling for an investigation into possible human rights violations by Lukashenko’s government, with a report to come by the end of the year.

The United States and the European Union have questioned the election and criticised the police actions toward peaceful protesters.

The EU is pondering sanctions for top Belarusian officials, but it failed to agree on imposing them this week and plans to continue discussions in the coming week. Meanwhile, Britain said Thursday it was working on sanctions and also was in discussions with the US and Canada.

EU Council President Charles Michel told the General Assembly on Friday in his own video speech that repression and intimidation must stop and those responsible must be held accountable.

We stand with the Belarusian people who must be free, without any external coercion, to choose their own future, Mr. Michel said, calling for inclusive national dialogue facilitated by the Organization for Security and Cooperation in Europe.

Mr. Lukashenko has bristled at suggestions of starting a dialogue with the opposition and has cast the protests as part of a Western plot to isolate Russia, Belarus’ his main sponsor and ally.

Mr. Makei said the situation in Belarus indeed has become complex, but he dismissed Western countries’ complaints as meddling statements brimming with cynicism.

In actual fact, they are nothing but attempts to bring chaos and anarchy to our country to make Belarus lose many years of development, the foreign minister said.