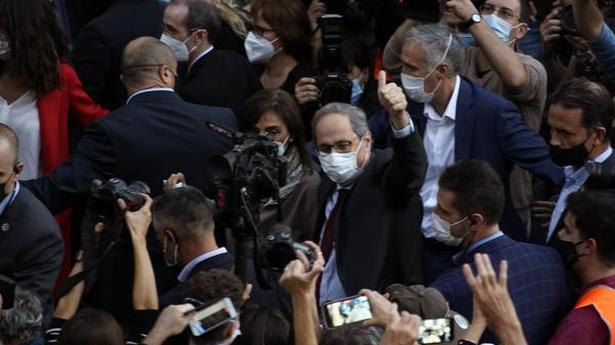 The case stems from Quim Torra’s refusal to follow orders from Spain’s electoral committee to remove a banner supporting jailed separatists from the main facade of his government palace.

Outgoing Catalan leader Quim Torra said on Monday that regional elections would be held in the coming months after Spain’s Supreme Court upheld a ruling barring him from public office for 18 months, sparking protests in Barcelona in the evening.

In a televised address, Mr. Torra said he would appeal the sentence, which he described as a politically motivated move to overthrow the Catalan government.

“This needs to be a turning point. There must be a new plebiscite to confirm the October 1st referendum,” Mr. Torra said, referring to a 2017 independence poll that was declared illegal by the courts.

“I will continue to work tirelessly for the freedom of Catalonia from any other space from which I can be helpful,” he said.

Mr. Torra left the Catalan government building on foot as a few hundred people gathered to protest the ruling.

The case stems from Mr. Torra’s refusal, during a national election campaign in 2019, to follow orders from Spain’s electoral committee to remove a banner supporting jailed separatists from the main facade of his government palace.

Mr. Torra has defended himself on grounds of freedom of expression, but the court said its ruling encompassed not personal rights but defiance of a constitutional body.

Chanting “Independence” and “No step backwards”, several hundred people marched in central Barcelona against the ruling, with some protesters throwing headless pigs at police officers outside the central government’s delegation in Barcelona.

A small group later entered the park – which had its main gates locked – where the Catalan parliament is located and threw stones at the police.

“Since they cannot beat us, they have to repress people in an outrageous way”, Eugenia Iborra, a 58-year-old high school teacher, said of the Supreme Court judges, calling for civil disobedience protests in the coming weeks.

Catalonia’s separatist drive has dominated Spanish politics for several years, particularly since the regional assembly made a unilateral declaration of independence in October 2017 following a referendum declared illegal by judges.

“Once more, the Spanish state interferes in our democratic institutions,” added Mr. Torra’s predecessor, Carles Puigdemont, who is in self-imposed exile in Belgium.

Mr. Torra said earlier this month that his removal and a subsequent election would create instability during the fight against the COVID-19 pandemic.

Catalonia’s 7.5 million people are split over independence, with the latest opinion poll showing 42% in favour and 50% against.