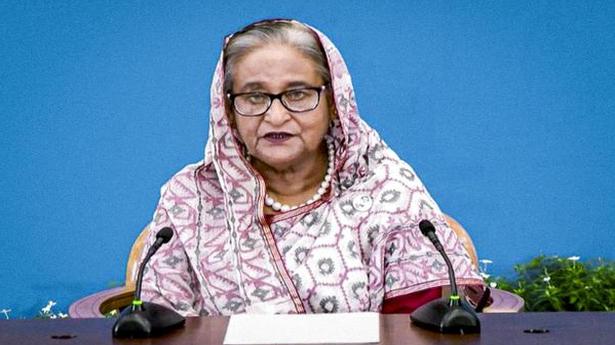 Bangladesh wishes to maintain friendly ties with all countries, Prime Minister Sheikh Hasina said on Sunday. During an interaction with the outgoing Indian High Commissioner in Dhaka, Ms. Hasina suggested that neighbouring countries should consider using airports located in areas like Sylhet.

“We always think that better cooperation is needed with the neighbouring countries, for the development of the people of the region as our foreign policy is ‘friendship to all and malice towards none’,” she said during her meeting with Riva Ganguly Das. The comments offer a window to the foreign policy of the country which has recently been in news after China intensified its outreach in the backdrop of the pandemic. The Indian diplomat had earlier come into spotlight after it was found that Ms. Hasina had refused to meet her despite requests. The gesture was interpreted as a snub to India.

The Prime Minister’s comments were shared on Sunday by Press Secretary Ihsanul Karim who also said Ms. Hasina has suggested that neighbouring countries should consider using airports in Sylhet, Chittagong and Syedpur. Significantly, the airport in Sylhet has drawn attention internationally as China has bagged a major contract to build the new terminal of the Osmani International Airport. India’s Larsen and Toubro also tried for the project.

The meeting between Prime Minister Hasina and Ms. Das set the stage for the 6th Indo-Bangladesh Joint Consultative Commission’s meeting expected to take place on September 29. The virtual meeting will be crucial as it comes in the backdrop of growing concern in India about Bangladesh-China collaboration on multiple fronts.

To deal with the sudden deterioration in the bilateral ties, Foreign Secretary Harsh Vardhan Shringla had paid an urgent visit to Dhaka between August 18-19 when both sides had announced the upcoming meeting of the JCC. However, within a month, ties received a fresh setback when India banned export of onions on September 14. India made an exception on September 17 but Bangladesh complained that thousands of tonnes of onions could not reach its market as the trucks ultimately were not allowed to cross the border.

Mr. Karim also said Ms. Hasina took up cooperation regarding the pandemic. In the interaction with Mr. Shringla, Bangladesh had acknowledged the need to collaborate with Indian pharmaceutical companies and produce vaccines. These issues are likely to figure in the discussion that will take place between the two sides led by External Affairs Minister Jaishankar and his Bangladesh counterpart Dr. AK Abdul Momen on September 29.