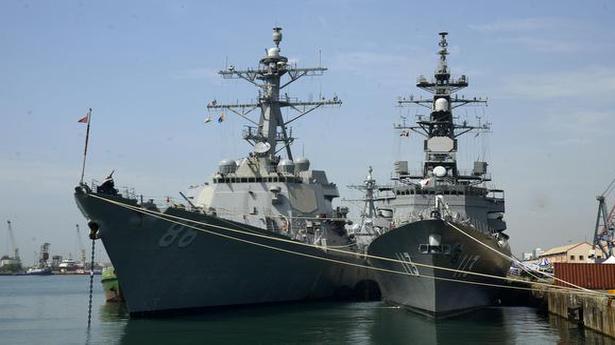 October meeting of Quad countries to cover a host of issues including defence, economic areas and COVID-19.

The inclusion of Australia in the Malabar Exercise – trilateral naval exercises between India, the U.S. and Japan – was still being discussed, a senior U.S. State Department official told reporters on a briefing call on Wednesday . The official’s remarks also included India-U.S. interactions at multilateral forums, Amnesty International India halting its activities and the India-China border standoff.

Regarding the October ministerial-level meeting of the “Quad”- India, Australia, the U.S. and Japan – the countries will discuss a comprehensive set of issues, but the actual agenda is going to be kept “close-hold” [ a security classification] among the countries, the official said, so there can be a more “frank and open” discussion of those issues.

The official, who called the Quad partnership “increasingly strong,” said that the agenda would cover defence, economic areas and, especially, COVID-19.

India has been reluctant to include Australia in the Malabar naval exercises which include three of the four Quad members. A militarisation of the Quad could be viewed by China as a strategy to contain it, not something India has wanted to do.

The official said that discussions were still on-going on whether or not Australia would join the other three countries in the exercises, to be held this year in the Bay of Bengal.

The agenda for the U.S.-India October 2+2 ministerial dialogue (defence and foreign affairs ministers of both countries) is currently being worked out and is expected to be “comprehensive, wide-ranging and strategic,” the official said. It will include defence topics, diplomatic cooperation, cooperation at multilateral forums, economic cooperation, space and technology and people to people cooperation, as per the official.

“Perhaps the clearest example of how the U.S.- India partnership has benefitted the world is in the context of the COVID-19 pandemic,” the official said.

At a meeting held during UN High Level Week last week, India and other G4 countries (Brazil, Germany and Japan) declared that they were looking for text-based negotiations and results within specified time frames for U.N Security Council reform.

The U.S. has supported India’s quest for a permanent seat on the Security Council. This was reiterated on Wednesday.

Responding to a question on whether the U.S. would take a stand on the location of the disputed border between India and China and support India’s position, the official said, “We strongly oppose any unilateral attempts to advanced territorial claims by incursions ( by military or civilian incursions) across the border, or across the established line of actual control.”

“ And the disputed boundaries: all we can say is that we encourage India and China to use their existing bilateral channels to discuss those and not resort to military force.”