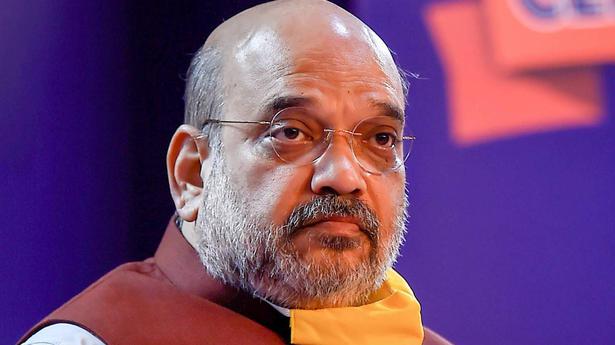 He will visit State just ahead of Durga Puja; party holds brain-storming meeting in Delhi

Union Home Minister Amit Shah will be leading the BJP’s charge in West Bengal and will be headed to the State just ahead of Durga Puja, later this month, to address a workers meeting there.

Senior leaders in Delhi and West Bengal met at party president J.P. Nadda’s residence on Thursday for nearly four hours to hammer out some of the programmes to play up the political activity in the State. West Bengal is scheduled to go to Assembly polls early next year.

After the meeting, Mr. Ghosh told the media that it was mostly about poll preparedness and to ramp up political activity after the lockdown. He confirmed that Mr. Shah will visit the State just before Durga Pooja sets in, likely just ahead of the important dates from Panchami to Ashtami. Mr. Shah would be overseeing much of the party strategy with regard to West Bengal going ahead.

According to senior BJP leaders present at the meeting, the discontent expressed by Mr. Sinha on his being dropped as national secretary after Mr. Nadda reconstituted the national team of office bearers, and the inclusion of Mr. Roy and his protégé Anupam Hazra was not brought up specifically. Mr. Sinha had taken to twitter to express his discontent at being dropped publicly. “The issue was not specifically brought up, only a general resolve to work in unity was expressed,” said a source, who added that Mr. Shivprakash had however spoken to Mr. Sinha about his issues and calm matters down.

The BJP won an unprecedented 18 Lok Sabha seats in the 2019 polls in West Bengal and has emerged as the real challenger to the ruling Trinamool Congress led by Chief Minister Mamata Banerjee. The party is very keen to overcome the disruptions to the political activity due to COVID9 and build up a campaign momentum for the Assembly polls.