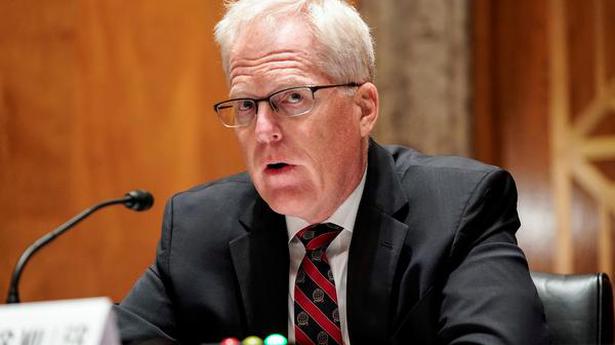 In mid-March, AQIS published a special issue of Nawai Afghan Jihad praising the U.S.-Taliban agreement, which mirrored al-Qaeda’s leaders’ statements on the deal.

AQIS was set up by al-Qaeda chief Ayman al-Zawahiri in 2014 to expand the terror group’s influence in the region.

In South Asia, al-Qaeda in the Indian Subcontinent (AQIS) has struggled to rebound from the death of its leader, Asim Umar, in a U.S. military raid in Afghanistan in September 2019 and is probably only capable of small-scale regional attacks, Christopher Miller Director, National Counter-terrorism Center, told a Senate committee on Thursday.

Testifying before the Senate Homeland Security and Governmental Affairs Committee on the Threats to the Homeland, the top American counter-terrorism official said that in mid-March, AQIS published a special issue of Nawai Afghan Jihad praising the U.S.-Taliban agreement, which mirrored al-Qaeda’s leaders’ statements on the deal.

Finally, al-Qaeda’s presence in Afghanistan has been reduced to a few dozen fighters who are primarily focused on their survival, and are probably incapable of conducting attacks outside the country under sustained CT pressure, Mr. Miller said.

According to Mr. Miller, since the Global War on Terror began nearly two decades ago, the U.S. has significantly degraded terrorist adversaries and made the U.S. a considerably harder target for them to reach.

“Today’s terrorism threat to the U.S. and our allies is less acute but more diffuse — emanating from more groups in more places than it did in 2001,” he said.

While continued counter-terrorism pressure has degraded the group’s Afghanistan-Pakistan senior leadership, in the near term, al-Qaeda is more likely to focus on building its international affiliates and supporting small-scale, readily achievable attacks in key regions such as East and West Africa, said FBI Director Christopher Wray.

Simultaneously, over the last year, propaganda from al-Qaeda leaders seeks to inspire individuals to conduct their own attacks in the U.S. and the West. For example, the December 2019 attack at Naval Air Station Pensacola demonstrates that groups such as al-Qaeda continue to be interested in encouraging attacks on the U.S. soil, he said.

Mr. Miller told senators that 19 years ago, after the shock of al-Qaeda’s devastating attacks abated, the U.S. set out to accomplish three objectives; one, harden its borders; two, go overseas to destroy the safe havens and sanctuaries of al-Qaeda and its associated groups and attrit their combat forces; and three, address the drivers of instability that created al-Qaeda by supporting like-minded partners in their efforts to combat Islamist extremism.

“Due to the enormous dedication, selfless service and sacrifice of hundreds of thousands of Americans and like-minded foreign partners, we have been remarkably successful in accomplishing the first two objectives.”

“I sense that we are on the verge, if providence is kind, of transitioning from a U.S.-led, partner-enable campaign to an era where local and regional partners take the lead and we provide them niche support to fill gaps in their security, intelligence, informational and legal architectures,” he said.

“I must be clear and not histrionic. Our enemies will successfully attack us again, as their adaptation and innovation are driven by a profound hatred for what we represent. This is our terrorists’ dilemma and their strategic advantage. They only need to be successful once while our defences must be successful all the time for preventing a cataclysmic attack. But our enemies have profoundly underestimated the resilience of the American people time and again,” Mr. Miller said.

Mr. Miller wondered if the 9/11 al-Qaeda leaders regretted their decision to attack the U.S.

“I’m confident the survivors must. They thought us soft, and spoiled and morally unanchored. They are now either dead, imprisoned or in hiding awaiting death or capture. Their ideology is debunked in the overwhelming majority of this Islamic world.”

“No one today misjudges our resolve and commitment to protecting the security of our citizens and using all available instruments of national power against those that bring war and violence to our shores,” he added.