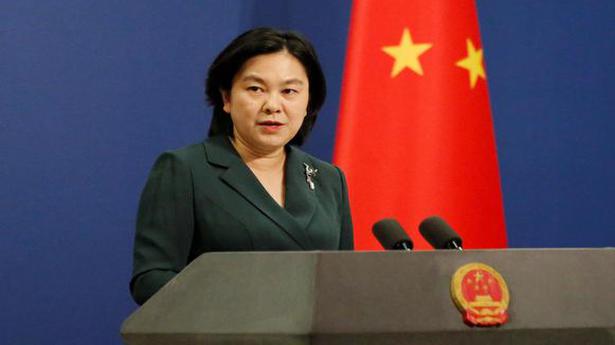 China’s State media has been particularly critical of Mr. Pompeo, and highlighted the fact that he was the only one among the four ministers to directly mention China.

China on Friday said it was opposed to “organising closed and exclusive cliques”, underlining its wary response to this week’s ministerial meeting of the Quad grouping, or India, Australia, Japan and the United States.

At Tuesday’s ministerial meet in Tokyo, U.S. Secretary of State Mike Pompeo singled out China as a threat to the region, although the three other foreign ministers, including External Affairs Minister S. Jaishankar, did not directly mention China. They did, however, express broad concerns about maintaining a rules-based order, freedom of navigation and the peaceful resolution of disputes in the region.

“As partners in this Quad, it is more critical now than ever that we collaborate to protect our people and partners from the Chinese Communist Party’s exploitation, corruption, and coercion,” Mr. Pompeo said. “We’ve seen it in the South China Sea, in the East China Sea, the Mekong, the Himalayas, the Taiwan Straits. These are just a few examples.”

Speaking at a press briefing in Beijing on Friday, the first following the week-long national holiday in China, Foreign Ministry spokesperson Hua Chunying said in response to a question on the Quad meet, “This is now the 21st century and we are living in an era of globalisation. The interests of all the countries are so intertwined that organising closed and exclusive cliques will not help to build mutual trust and cooperation, especially when we are faced with urgent tasks of fighting the pandemic and reviving the world economy.”

“We hope countries will bear in mind the common interest of all countries and focus on beating the virus with collective efforts, while creating a peaceful environment and cooperation opportunities for the regional and global economic recovery,” she added.

China’s State media has been particularly critical of Mr. Pompeo, and highlighted the fact that he was the only one among the four ministers to directly mention China.

“Pompeo said it was critical now for the U.S.’s regional allies in the Indo-Pacific region to counter the Communist Party of China’s exploitation, coercion and corruption in the South and East China seas, the Mekong, the Himalayas, and the Taiwan Straits. Meanwhile, other Quad members have been cautious,” said a commentary in the Party-run Global Times by Shen Yi, professor at the School of International Relations and Public Affairs at Fudan University in Shanghai.

“Such a result could be argued as predictable, as each of the Quad members is calculating their own separate interests,” Mr. Shen said. “The U.S., which has signed military alliance treaties with Japan and Australia, now wants to rope India in to boost not only the alliance and to gang up on China. However, such a goal is not easy to realise. India is unlikely to take the U.S. side. It has been buttering its bread on both sides of major power games ever since the Cold War.”

Mr. Shen said “the U.S. is hoping to formalise the Quad into a NATO-like alliance” but the other members were less enthusiastic. “If the U.S. wants to count India in its ‘Asian NATO’, it would need to persuade India to give up its Russia-made weapons and substantially invest to change the standards of Indian firearms to the standards of the U.S.,” he said. “The U.S. has been barking aloud before and during the Quad meeting. But will it bite with expected ‘unity’ from the Quad? The answer is no.”