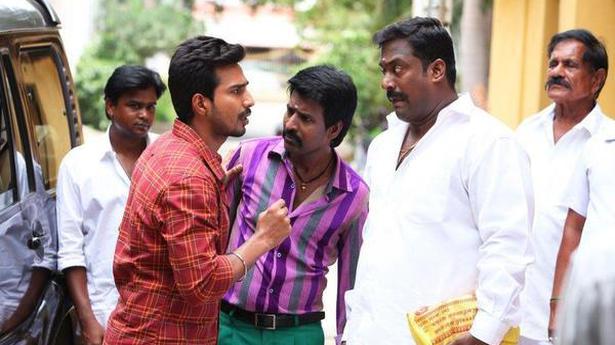 Actor Vishnu Vishal’s father and former Director General of Police (DGP) Ramesh Kudawla and film producer Anbuvel Rajan have been booked by the city police for allegedly cheating actor Soori to the tune of ₹2 crore over a land deal.

An FIR was opened by Adyar Police on Thursday against Mr. Kudawla and Mr. Rajan following directions from a metropolitan magistrate court in Saidapet on a petition filed by Mr. Soori.

Mr. Soori and Mr. Vishal have been friends for long since both acted in “Vennila Kabadi Kuzhu”, Kullanari Kootam, Velaynu Vandha Vellakaran and four more films. Mr. Soori and Mr. Kudawla were also well acquainted with each other. Mr. Kudawla was Director-General of Police of Tamil Nadu Fire and Rescue Services and retired from service in June last year.

According to a petition filed by E.Vigneshwaran, Mr. Soori’s personal manager, in 2015, Ramesh approached Mr. Soori to act in “Veera Dheera Suran” as his son would be playing the lead role in the movie produced by AVR productions, owned by Anbuvel Rajan. Mr. Soori had agreed to act on a remuneration of ₹40 lakh for 15 days’ shooting. Later, they changed the production name to Vishnu Vishal Movies and the name of the film changed to “Kadha Nayagan”. Though reshoot was done for 32 days, Mr. Soori claimed he did not receive the payment.

Also Read: Get ‘First Day First Show’, our weekly newsletter from the world of cinema, in your inbox. You can subscribe for free here

In the course of film shooting, Mr. Soori evinced an interest in buying land and Mr. Ramesh voluntarily came forward to help him and asked his business associate to facilitate the process. He was shown a property of 1.8 acres in Siruseri and Mr. Rajan claimed that he was holding an agreement over the property. Mr. Ramesh himself paid ₹40 lakh as advance for the property, which was the payment of Mr. Soori for acting in the film. Mr. Soori also paid ₹3.15 crore altogether

Only after registration of the property, in 2018, Mr. Soori came to know that the property was not approved as residential property. He claimed he learnt that Mr. Rajan and Mr. Ramesh together had cheated him by misusing their power as agreement holders, the petitioner said.

Mr. Soori’s advocate L.Infant Dinesh said initially they had sent a postal complaint to Adyar Police and other police authorities. “Since there was no response, we approached a metropolitan magistrate court seeking a direction to police register a case. On the orders of court, police registered a case against them on Thursday.”

Mr. Vishal issued a statement denying all allegations against him and his father. He said, “It is so shocking and painful to read such false allegations against me and my father. Obviously, vested interests are working. In fact, Soori has to refund to Vishnu Vishal Studioz an advance paid to him in 2017 for a film “Kavarimaan Parambarai,” which eventually was dropped. We have complete faith in law and judiciary system… (we) will strictly go by what the law permits.”

Sources said the case has been forwarded by Adyar Police to the Central Crime Branch for further investigation.